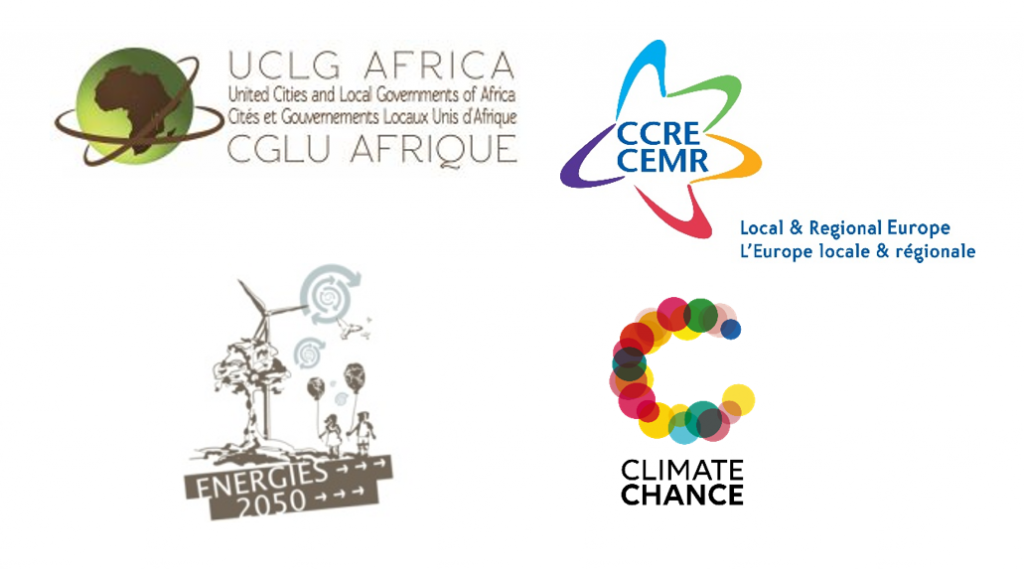 12/12, 3pm : Structuring and enhancing climate action in African cities and territories to support the implementation of Nationally Determined Contributions (NDCs)

Organised by ENERGIES 2050, United Cities and Local Governments of Africa (UCLG Africa), The Council of European Municipalities and Regions in Europe (CCRE/CEMR) and the Climate Chance Association, this side-event will present the action plan of the Tclimate change task force to support climate action in African cities and territories.

The current commitments made by the States-Parties to the UNFCCC in their NDCs are not compatible with an increase in temperatures below 1.5°C or 2°C by 2100. At the same time, the scientific community and the increasingly visible consequences of climate change call for immediate action. Given the challenges and the urgency to act, the commitment of all stakeholders is essential.

Talanoa’s dialogue is intended as a mean to involve in a deeper way non-state actors in the fight against climate change. Local governments are at the heart of the Agenda of action given their ability to act as closely as possible to the needs of their territories and their responsiveness provided they have the necessary skills and resources.

African cities are responsible for a significant proportion of the continent’s GHG emissions and host hundreds of millions of inhabitants in areas that are often very vulnerable to the effects of climate change. This trend is not expected to slow down. The African population is expected to reach 2.4 billion by 2050, including 1.34 billion urban versus 455 million at present. In addition, African cities and territories concentrate the bulk of capital and economic activity and are therefore key players in the implementation of climate change policies.

This reality calls for a reinforced articulation between national commitments and the local dynamics of non-state territorial actors (local governments, associations, researchers, the private sector, etc.) in the context of the implementation of NDCs. The necessary multisectoral dimension of decentralized cooperation must be added here, combining adaptation, development and mitigation in order to take into account the complexity of interconnected and interdependent urban and territorial systems.

This event is part of the follow-up to the Africities 8 declaration and in particular the 1st edition of the Climate Day organized on November 22, 2018. This declaration recognizes the importance of territorialising states’ climate commitments and calls for recognition of the LDCs. (Localized Determined Contributions).

This event will highlight the place of local governments and non-state African actors in their diversity as preferred partners in the implementation of NDCs.

The Climate Change Task Force for African Cities and Territories set up by UCLG Africa and its partners as well as exemplary practices and initiatives will illustrate the debates (CoM CCA, Climate Chance, etc.).

An invitation to pool on-going initiatives around the implementation of NDCs will be launched.

–          M. Mohamed SEFIANI,  Mayor of the city of Chefchaouen and President of the Forum of Intermediate Cities – UCLG Africa Climate Change Task For co-President

–          Mrs Célestine Ketcha Epse COURTES  Mayor of the Municipality of Bagangté, Cameroon and President of REFELA – Network for Locally Elected Women of Africa