The Climate Chance Summit - Africa 2019 will take place in Accra from October 16th until October 18th at the International Conference Center in Accra and is in partnership with the National Association of Local Authorities of Ghana (NALAG).

Accra – Ghana 27 February 2019 – The Climate Chance Summit – Africa 2019 will take place in Accra from October 16th until October 18th at the International Conference Center in Accra. It will be a wide gathering of 1000 non-state actors fighting climate change on the African continent, including local governments, businesses, trade unions, environmental NGO’s, farmers, women and youth organisations, researchers,etc. It  will highlight  the engagement of Ghana and more broadly the African actors in fighting climate change.

The Summit is co-organized by the National Association of Local Authorities of Ghana (NALAG) and the Climate Chance Association.

A partnership between the Climate Chance Association and NALAG 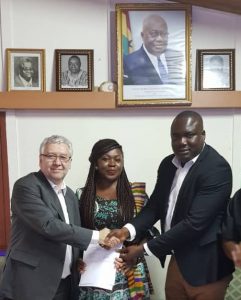 Mr. Ronan Dantec, French Senator, President of the Climate Chance Association, and United Cities and Local Government (UCLG) spokesperson on climate  gathered on the 27th of February in Accra with Hon. Felix Mensah Nii Anang-La, President of the National Association of Local Authorities of Ghana (NALAG) as well as Metropolitan Chief Executive of the Tema Metropolitan Assembly  to officially announce and launch the second edition of the Climate Chance Summit Africa – 2019.

“Since the Climate urgency is more pressing than ever and that the States pledges are insufficient, it is absolutely necessary to raise ambition and accelerate the implementation of the Paris Agreement, by bringing together a large network of Subnational Governments and Non-State Actors and by anchoring the implementation of concrete climate actions at the local level” Ronan DANTEC, President of the Climate Chance Association underlined during the press conference.

« This summit will be the most important event of Subnational Governments and  Non-State Actors in Africa with the priority to reinforce the thematic coalitions and deliver strong common messages that will be carried to key climate events”Hon. Felix Mensah Nii Anang-La, President of the National Association of Local Authorities of Ghana (NALAG) said.

After the first successful edition of the Climate Chance Summit – Africa in Abidjan in 2018, the 2019 Summit in Accra will intend to gather even more widely the actors within the sectoral coalitions of actors and their roadmaps. The “coalitions” are a gathering of actors involved in climate action in different key sectors (energy, agriculture, finance, mobility, urban planning, agriculture, etc) willing to concretely contribute to reinforcing the mobilization of the local governments and non-state actors in the fight against climate change in Africa.

As the President of the Climate Chance Association, Ronan DANTEC said : « This summit will be the opportunity to highlight the good practices of the African local actors and it will be a real  chance for non-state actors to gather and share their experiences by responding to the call for proposals that will be launched prior to the Summit. »

A call for proposals of good practices in terms of climate action on the African continent and in regards to the 8 themes described further below will be launched in March 2019 during the Africa Climate Week. The selected initiatives or actions will reinforce and provide inspiration for the African sectoral coalitions Besides, the collected good practices will be published on the Climate Chance cartography of climate action.

An all year round preparation of the Climate Chance Africa Summit

As Ronan DANTEC said : « This summit is aimed at subnational governments and  non-state actors which play a crucial role in Climate Action on the ground and in pushing for the implementation of the Paris Agreement. »

Therefore, this summit will also be the moment to prepare specific messages of the African Continent, to highlight its engagement and achievements. It will point out the demands and specific propositions of the local actors fighting against climate change on the continent especially regarding the access to climate finance for non-state actors.  The African position will be then carried out to key international events from the Climate Agenda (Climate Finance Day, COP25, UNSG Summit, etc.).

The main topics addressed during this summit will be :

This summit will also host partners events, such as the presentation of the Covenant of Mayors in Sub Saharan Africa (CoMSSA) Stage 2, a meeting of UCLG-Africa Climate Task Force, a training session for the members of the “MobilizeYourCity” partnership, side-events organized by OIF / IFDD, AFD, the Paris Process on Mobility and Climate (PPMC), the Global Alliance on Building and Construction (GABC), the African Development Bank, etc.

NALAG  is the mother Association and mouthpiece of all Metropolitan, Municipal and District Assemblies (MMDAs) in Ghana with the mandate of promoting good governance at the local level trough institutional strengthening, inclusiveness, empowerment of members and lobbying and advocacy for implementation of the right policies and provision of conducive environment for enhanced performance of local government authorities within the country. The origins of NALAG can be traced to 2nd April 1962, where two separate associations (the National Association of Local Councils and the Association of City/Municipal Councils) existed to serve the interest of rural and urban councils in Ghana. On 18th November 1977 the two Associations realizing that there was a similarity in their objectives and that they were performing similar and duplicating roles, merged to form the National Association of Local Councils (NALCO) as an apolitical organization without religious or philosophical pre-occupation or orientation. Following the restructuring of the system of local government in Ghana in 1988 by the government of Ghana, and in tune with an international designation of Local Governments, NALCO became NALAG – National Association of Local Authorities of Ghana. NALAG continued to receive government subvention until 1998 when the Association voluntarily decided to opt out of it to give it the independence and autonomy to play its roles more effectively.

CLIMATE CHANCE is the only international organisation that aims to bring together all the non-state actors recognized by the UN (the 9 groups of actors: local authorities, companies, NGOs, trade unions, scientific community, agricultural, youth, indigenous peoples and women organisations), to develop common priorities and proposals and to strengthen stakeholders dynamics through networking (thematic coalitions, summits, portal of climate action). The Climate Chance association supports the central role of local climate action and the inseparable link between the climate agenda and the sustainables development goals.