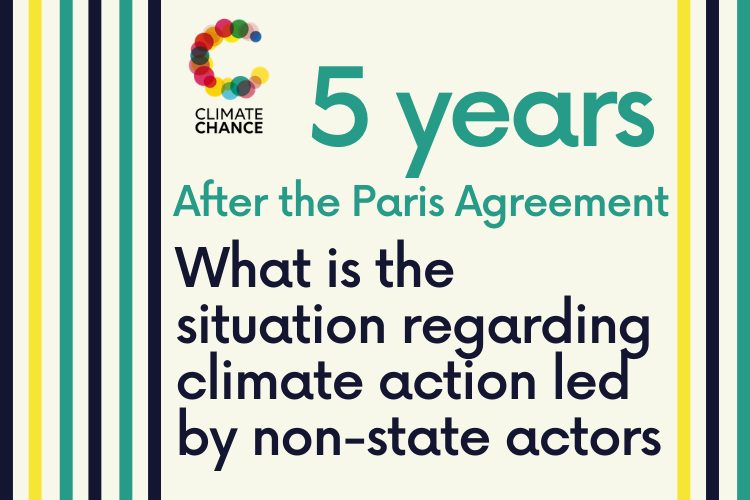 5 years after COP21, what is the situation regarding climate action led by non-state actors ?

Five years ago, when all the States of the world committed to the Paris Agreement, there was a renewed hope to stabilise the climate ... 5 years after COP21, what is the situation regarding climate action led by non-state actors ?

Ronan Dantec, President of Climate Chance
« Five years ago, when all the States of the world committed to the Paris Agreement, there was a renewed hope to stabilise the climate.

This hope was rapidly impacted by the election of Donald Trump in the United States, declared opponent to this agreement, or by the pursuit of the increase in emissions in the major emerging countries, or even in France, within two years of the Paris Agreement.

Yet, five years later, the situation is perhaps reversing, disproving the “climate fatalists”. The United States of America are back, Europe, China, Japan are launching new commitments in linewith a 2-degree pathway, nevertheless, we must not lose sight of the 1.5 degree challenge.

Above all, local authorities, businesses and NGOs are actively presenting tangible results, making their commitments more credible than ever.

The annual Climate Chance Synthesis Report analyses these and puts them into perspective : the prospect of clean renewable energy in sustainable mobility, disastrous results in terms of deforestation … This « state » of the world’s climate is precious to nourish our thoughts and our future actions. I invite you to discover the Report ».

Among the major trends that we have observed this year « out of the ordinary » and that we analyze in our new Global Sector-based Report :

Since its creation in 2015, Climate Chance mobilises non-state climate actors and strengthens their climate action by uniting them and exchanging best practices to help achieve the objectives of the Paris Agreement.

It is also the only international association to monitor, for the last 3 years, their climate actions at the global level with the Climate Chance Observatory’s Reports.

This monitoring plays an essential role, allowing a better articulation with the strategies and objectives of the States.

The Climate Chance Observatory analyzes and synthesizes the climate actions of local authorities, businesses, civil society and financial actors, each year in a global annual panorama with 4 Global Synthesis Reports on 4 major thematics :

4 Reports to better understand the challenges and the strategies to combat climate change of  non-state actors, on the trajectory mapped out in 2015 in Paris.