The eruption of the Covid-19 pandemic plunged the world into its first recession since 2008, and led to a record drop in global emissions in 2020 (-5% compared to 2019). This unprecedented shock and the ensuing economic recovery reveal some very distinct regional profiles when looking at the breaks in emissions trends since the Paris Agreement: in Europe and the Americas, the sharp drop in emissions accelerated a structural downward trend, while the increase in emissions from the biggest emitting Asian countries only slowed slightly. Since the end of 2020, the economic turnaround has seen high-carbon activities pick up rapidly. Among the biggest emitters, dependency on coal draws a very clear line between those regions moving away from it (United States, Europe), where the rise in emissions has not eclipsed the decrease resulting from the pandemic, and those regions where coal still has the support of public authorities (Asia-Pacific), to the point that it is the main reason behind a spike in emissions to levels higher than 2019. 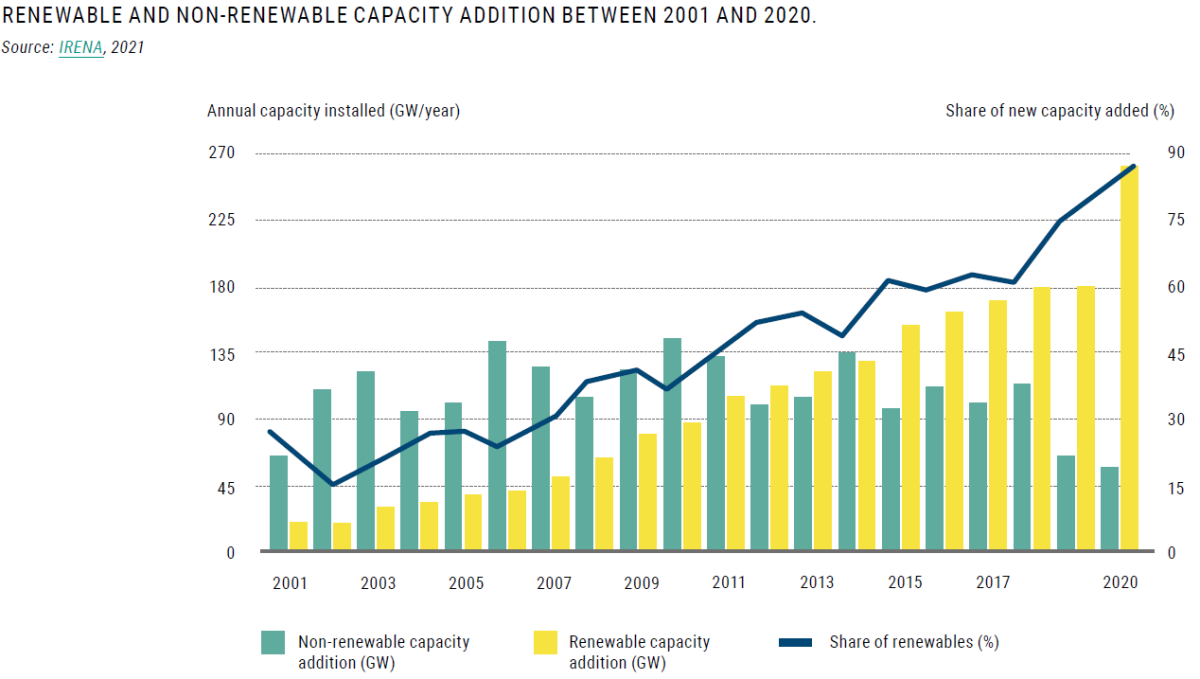 Despite the hopes kindled by the pandemic for a low-carbon economic recovery, a real global-scale transition is still not observable. Rather than net substitution of high-carbon means with low-carbon means of production and consumption, the trend over the period is one of accumulation: fossil and low-carbon fuels, combustion engine and electric vehicle fleets, new constructions complying with standards and old buildings to renovate, etc. However, relative transitions are taking place within the regional flows that feed into this accumulation. On the one hand, renewable energy is increasingly competitive compared to fossil energy, in particular coal, partly thanks to the increased price of coal in Europe, and partly thanks to Chinese investments, with record solar installations in Vietnam (+11 GW in 2020). In addition, electric mobility is picking up, driven by European and Chinese incentive policies, and by the explosion in electric buses in Latin America. These trends reveal the growth and consolidation of low-carbon economic and industrial sectors, spurred by threefold pressure from public authorities, citizens and markets. 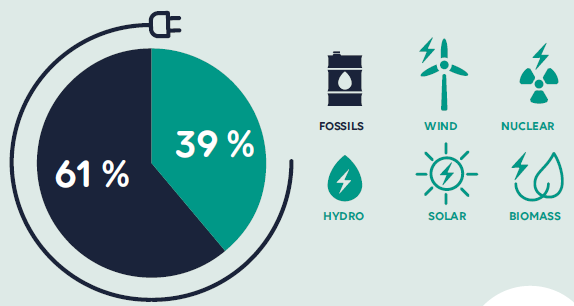 Whether it involves electric cars, heating systems, the decarbonization of heavy industries or international mobility, the electrification of end-uses is central to public and private strategies to drive the low-carbon transition. The speed with which these strategies are being put in place can sometimes trigger outward resistance to local initiatives, such as the battle posing US cities against states and gas companies on energy codes in new buildings. In contrast, automobile manufacturers are sometimes in more of a hurry than states are to move away from producing combustion engine vehicles. Whatever the case, an “all electric” solution will only prove effective for the climate if the electricity mix is dominated by low-carbon energy. Yet, while production from renewable sources was at its highest level in 2020, the mix in major markets like China, India, the United States and to a lesser extent Europe, remains mostly dependent on coal and gas. For citizens with no alternative but fossil fuels to heat and move around, and for nations, prolonged dependence on gas, oil and coal could turn out to be costly, as suggested by the energy crises that hit China, India and Europe in fall 2021.

Following the initial shocks triggered by Covid-19, economic activity picked up fast, to the point o provoking tensions and breakdowns in global supply chains, made worse by the disorganization of maritime freight. The booming transition industries have not escaped either: the lumber, bicycle, and semi-conductor sectors are facing shortages and spectacular inflation of raw material prices, accentuated by the concentration of their supply chains between the hands of a few actors, causing bottle necks. Too slow to benefit the climate, regional transitions are moving too quickly for global supply chains. We are in fact witnessing a critical point in the vigorous adaptation of the globalized economy to meet the new requirements of a low-carbon world, in a context of restrictions and shortages provoked by the pandemic and its consequences.

A barometer of commitment since the Paris Agreement, “carbon neutrality” is now part of large companies’ recovery and growth strategies

The way the economy is adapting to the requirements of the transition can be seen in the adoption by major private groups of “carbon neutrality”, which has acted as a barometer of climate action since the Paris Agreement. In energy, industry, sea and air transport, large groups are setting targets to reduce greenhouse gas emissions, increasingly coupled with detailed action plans. Now part of companies’ growth strategies, the alignment of targets and action to reduce emissions with the trajectories required to limit warming to 2°C or 1.5°C is the object of close attention by specialized NGOs. It has to be ensured that 30-year commitment do not delay short-term action, as rapid action forms the basis of all scenarios stabilizing warming under 2°C.

The way that actors are adapting to multiple shortages and the low-carbon economy can also be seen in the progressive concentration of some markets around a few key players, and the vertical integration of industries between raw materials suppliers and manufacturers of finished products. Mining companies are multiplying mergers and acquisitions to increase the exposure of their business portfolios to the metals required for the energy transition. European oil majors, armed with significant capacities to invest and purchase assets, are taking up more and more place on low carbon markets as they finance their diversification into renewable energy, electric vehicle charging stations, hydrogen, etc. The end of public support measures to produce energy and the surge in power purchase agreements are boosting the emergence of a major players’ market that benefits large energy providers more than municipal companies and citizens’ cooperatives. The electric micro-mobility market is also increasingly concentrated, with rapid entrances and exits of new products and players. 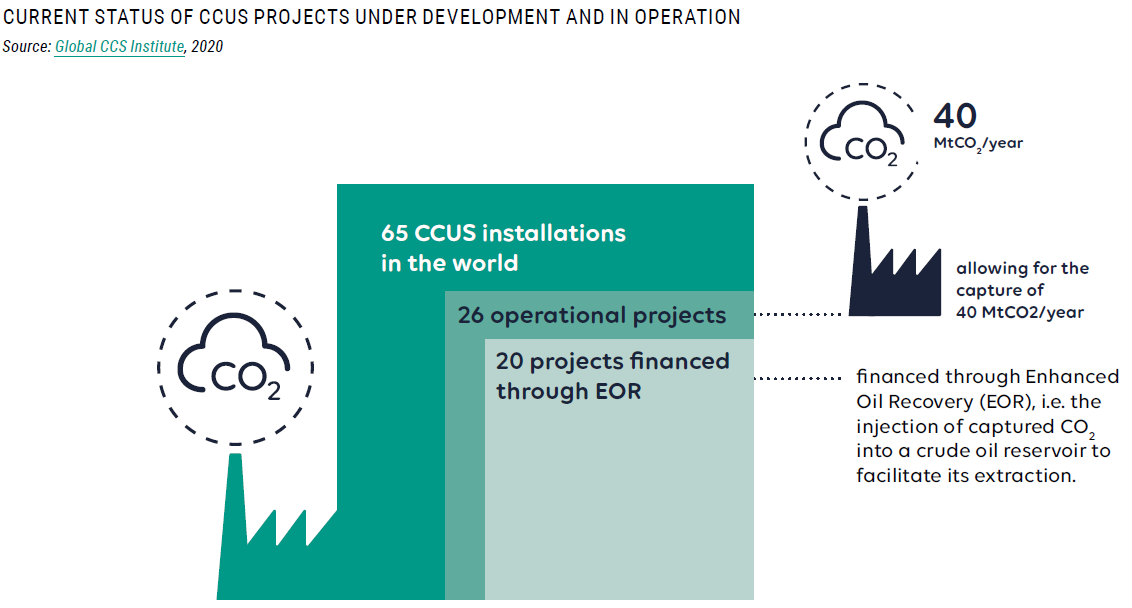 The main requirement for actors to align on carbon neutrality is to decrease direct and indirect emissions. This is a tall order for some heavy industries whose core activities are reliant on high-emitting industrial processes (steel, chemicals, cement), and for international transport, which requires immense quantities of energy. Boosted by the economic upturn and recovery plans, low-carbon hydrogen and carbon capture (CCUS) received massive investment commitments and increased political interest in 2020. For the moment, though, their use for decarbonization purposes remains marginal. Hydrogen, whose production is still highly dependent on fossil fuels, is mainly used in petroleum refining and ammonia production, while CCUS is mostly financed to assist enhanced oil recovery in depleted reservoirs rather than to sequestrate carbon permanently.

With a mix of green and brown investments, the recovery is taking an ambiguous turn in several nations

National financial support and regulations can act as catalysts to encourage non-state actors to adopt transition technologies, but can also have the effect of holding back the transition when directed at emitting sectors. Faced with pressure on supply chains of goods and raw materials strategic to the transition, Western nations are attempting to constitute regional industrial ecosystems directed towards low-carbon technologies. Alongside occasional rescue plans for emitting industries, often with no climate compensation, some of the recovery plans implemented by G20 nations are attempting to direct the economic rebound towards a transition.

Often drivers of action, local governments adapt the pace of the transition to match the needs and capacities of their communities 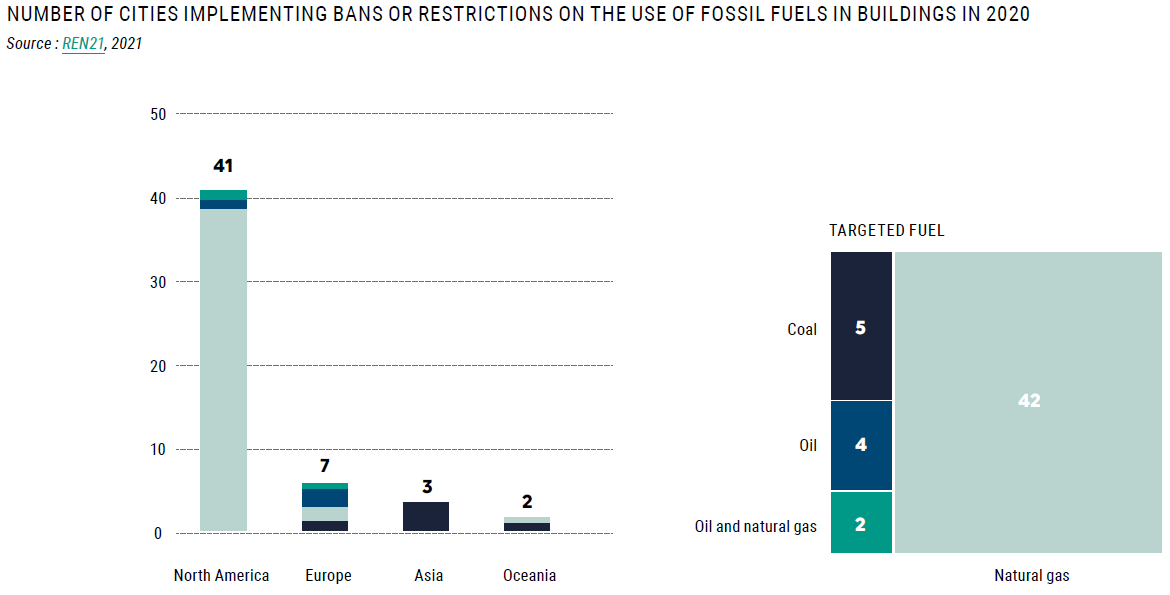 As already pointed out in the Local Action Report 2021, local governments can play a key role in bringing down emissions, for example in Europe, where the cities involved in the Covenant of Mayors for Climate and Energy decreased their emissions by 25% from 2005 to 2017, outpacing EU’s 20% target in 2020, according to the Joint Research Center. Theses cities, which accounted for 15% of European emissions, provide evidence of a significant quantitative impact of urban policies in decarbonizing the continent. Acting in areas like renewable energy supply, the transformation of urban mobility, waste management, and control of building construction and energy supply, local governments can accelerate the creation of an environment that boosts the transition. However, the opposite is also true: the reticence of some US states to phase out fossil fuels in buildings or mobility shows that local governments can also hold back the transition when it threatens the economic interests of their communities.

With shareholder activism, civil society extends its scope of action

Lawsuits and court rulings on climate are now part and parcel of climate action, whether initiated by civil society or local governments. No doubt encouraged by some recent resounding successes, the number of lawsuits involving the climate has been steadily rising since 2017. In particular, the decisions are gaining in normative impact, calling on the prosecuted nations or companies to match their actions to their commitments. This year, civil society won several symbolic victories, against major fossil fuel players, but also had some setbacks, like the lifting of the ban on the Heathrow Airport extension. At the same time, civil society’s scope of action is widening. Following walks and strikes for climate, and the emergence of a non-violent climate activist culture, shareholder activism has now entered the climate struggle at the heart of major companies’ general assemblies. In another vein, the continued work of Indonesian NGOs is starting to bear fruit, installing a real normative practice in the palm oil industry.

Read more in the report
By continuing your visit to this site, you agree to the use of cookies for audience measurement purposes.
DeclineAccept