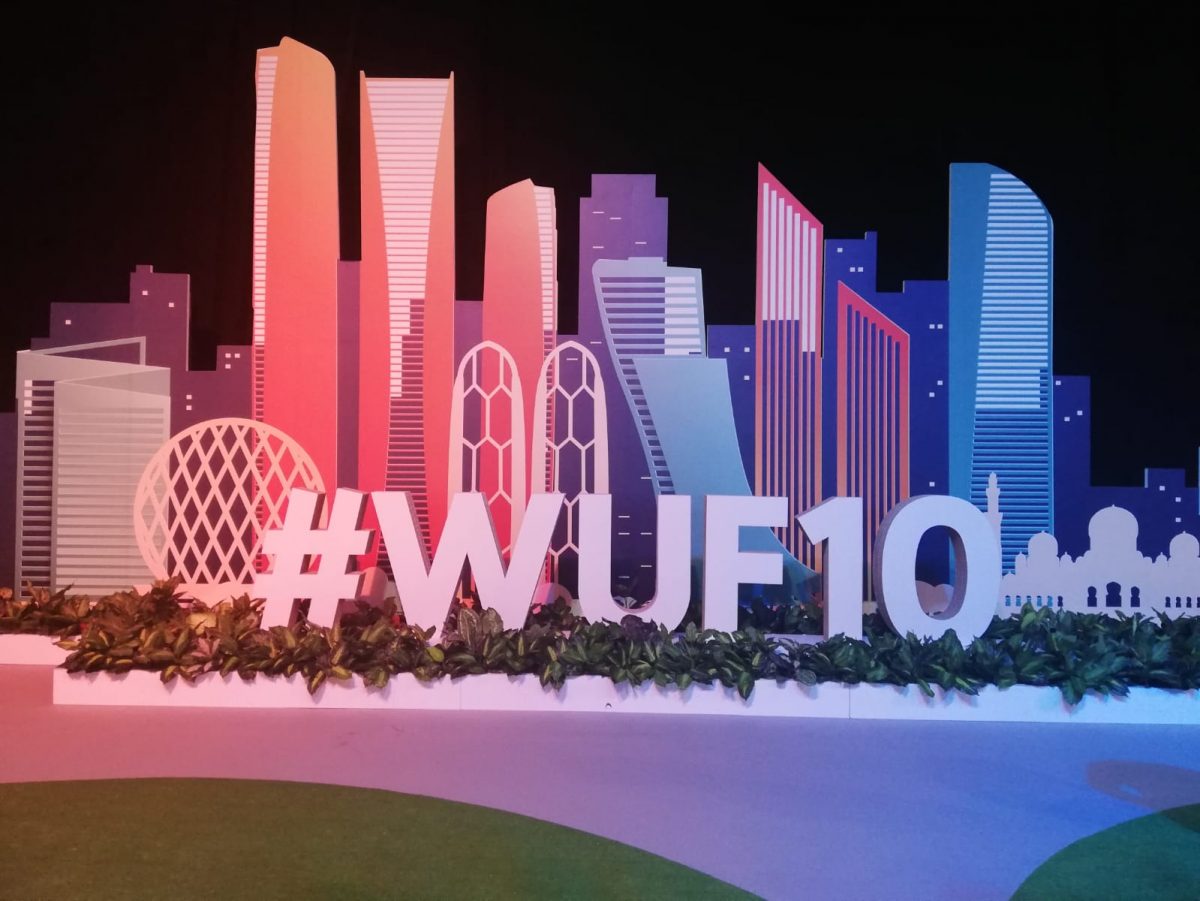 Initiated by the United Nations in 2001 who intended to question the acceleration of the urbanisation phenonmenon on economies, communities, cities, climate change or even public policies, the World Urban Fourm celebrated its 10th edition in Abu Dhabi. Climate Chance took part in this important event.

The place to be for sustainable urban planning stakeholders

The congress room of the “Abu Dhabi National Exhibition Centre” was packed to capacity for the opening ceremony of the World Urban Forum (WUF) held in the UAE capital from February 8-13, 2020 with the theme: « Cities of Opportunity: Connecting Culture and Innovation » as its main theme.

In her opening speech, the executive Director of the United Nations Programme for Human Settlements (UN-Habitat) Maimunah Mohd Sharif recalled the importance of this type of event amid growing urbanisation: “With 60% of the world’s population projected to live in urban areas by 2030, urbanization is inevitable and if left unplanned, it will continue to lead humanity deeper into the climate emergency and higher forms of inequality and deprivation.”

The tone was thus set and the representatives of Climate Chance, Romain Crouzet, Director of Programmes and Coline Desplantes, Project Officer, had the opportunity throughout the week to meet many actors in the field of climate and sustainable urban planning. The plan was mainly to share their experiences and projects and to reflect on ways to build a better life in the city.

Revealing the host city of the Climate Chance Summit Africa 2020

Climate Chance organised a side-event on Tuesday, February 1th with the participation of Yves-Laurent Sapoval, from the Global Alliance on Building and Construction (GABC), Frédéric Vallier, the Secretary General of the Council of European Municipalities and Regions (CCRE-CEMR), Innocent Uwimana, President of the Rwanda Association of Local Government Authorities (RALGA), Ladislas Ngendahimana, Secretary general of the RALGA, Juliet Mekone Sale, Regional director of West Africa for UCLG Africa and Agnès Lamptey from the Ministry of Local Governments and Rural Development of Ghana.

Therefore, be sure to save the date:

The Summit will be hosted by the City of Kigali in Rwanda and co-organised by Climate Chance and ICLEI Africa. Alongside the Climate Chance Summit, our partner will be holding their event: “Local Climate Solutions for Africa”.  (LOCS4Africa)

All the information on the event can be found on the dedicated webpage here: Climate Chance Summit Africa – 2020

Africa and Europe facing urbanisation: what future for land and biodiversity?

Wednesday, February 12th, Climate Chance co-organised an event with the FNAU. It consisted of a networking workshop entitled “Land use and regeneration policies to tackle climate change” with 4 speakers representing different sectors: Jean-Marie Quéméner, from the Ministry of ecological and solidary transition, Frédéric Vallier, the Secretary General of CCRE-CEMR, Abdoulaye Sylla, an urban planner from the City of Dakar, Mr. Jean-Pierre Elong Mbassi,  the Secretary General of UCLG Africa and Wallis Goelen-Vandebrock, the Deputy-director for implementation at the directorate general for regional and urban policy of the European Union.

The topic of the event was chosen by Climate Chance as land use and global warming are both major issues for the African continent and for Europe. In fact, according to the United Nation Organisation for Food and Agriculture (FAO), a third of arable land is currently threatened by soil sealing, notably as a result of rapid global population growth as well as unbridled growth in urbanisation.

Romain Crouzet highlighted “the importance of covergening the two agendas, climate and biodiversity”, to fight against climate change and protect biodiversity.

« We must completely and sustainably transform our development model. In Africa, it may be an opportunity, we can build something really new. In Europe, we are completely stuck in a logic that we have been developing over the past 50 years” , Frédéric Vallier.

« We can strike a balance between spontaneous movement and the necessary conservation of nature. », Jean Pierre Elong Mbassi.

Particular attention was paid to the city of Dakar, Senegal. Indeed, as Abdoulaye Sylla, urban planner in charge of the Climate and Territorial Energy Plan (PCET), explained, the capital city has a population of more than 3 million inhabitants and 98% of the area has become urban. Mobility accounts for 40% of the city’s emissions. A vulnerability study is therefore being conducted in order to anticipate and combat the harmful consequences of the demographic explosion and massive urbanisation.

The World Urban Forum concluded on Tursday, February 13th with the adoption of the « Abu Dhabi Declared Actions », a statement welcomed by Climate Chance.

As we prepare to go our separate ways I want us to remember that the best we can do is to pass it forward & to ensure that others get to enjoy both peace & good health, the ingredients for happiness. A big thank to all the people that made #WUF10 a captivating experience. pic.twitter.com/W4NpojmO1B

The World Urban Forum was the perfect opportunity for Climate Chance to spread the word that there will be no “better future for cities” if climate change issues are not taken into account at local level. As a matter of fact, Climate Chance has shown how local urban planning and land use are a powerful tools in the fight against climate change.

The Coalition “Development of African Cities in a Sustainable Way” that Climate Chance leads, with the FNAU and MTPA, highlights the essential links between urban development and the fight against climate change, particularly in Africa, where cities are growing much faster than on any other continent.

« By preparing beforehand the urban planning projects, we can take good (or bad) decisions that will then define the way cities will be able to face climate change”, Romain Crouzet, Programme Director summarised.

Local actors have an important role to play because of their complementarity in urban planning and housing, in development agendas, in the fight against climate change and for the preservation of biodiversity.

« The COP26 will be a high point of convergence of these agendas, as States are expected to re-evaluate their contributions determined at the national level, which will necessarily have to take these issues into account in order to be able to follow the path set by the Paris Agreement ».

The next World Urban Forum will be held in Katowice, Poland in 2022.