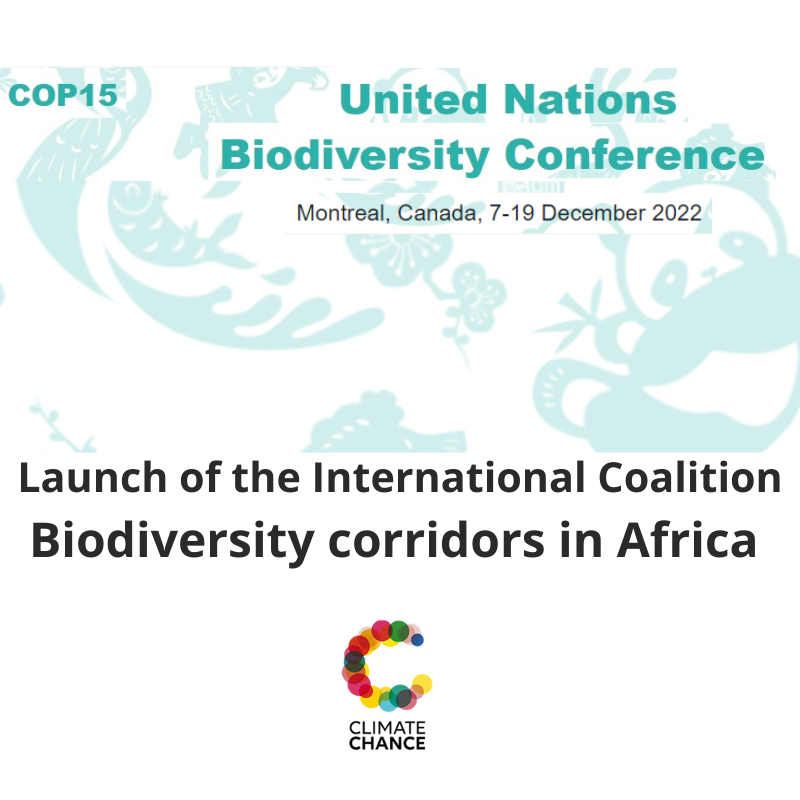 COP15 – Launch of the International Coalition on Biodiversity Corridors in Africa

Climate Chance is launching a major international initiative. The new project will be launched at an official event under the co-presidency of the French Republic, the Republic of Gabon, the Republic of Guinea and the United Republic of Tanzania, on 15 December at Montreal, during the COP15.

The protection of Africa’s vast wildlife and its iconic species, including elephants, chimpanzees, and lions, is a major priority in the preservation of global biodiversity. Protected areas and other conservation zones, especially when they benefit from ecological connectivity, networking through corridors, and relying on their natural migration areas, are much more effective than isolated areas.

Climate Chance, whose expertise focuses on connecting local actors, particularly through its Summits and African Coalitions, is launching a new international platform for mobilization around the central issue of biodiversity corridors in Africa, co-chaired by 4 countries: France, Gabon, Guinea and Tanzania.

This International Coalition will be a platform for coordination, exchanging best practices, and capacity building; it will also feature a continent-wide mapping. The Coalition also aims to mobilize funding to accelerate the renovation of old corridors or the development of new ones. Launched in December 2022, the coalition will deploy its governance and working groups in the first quarter of 2023.

As of January 2023, Climate Chance will implement its first demonstration project in Guinea, a country with severely degraded forest cover, at the intersection of many ecological corridors.

Climate Chance is launching an International Coalition “Biodiversity Corridors in Africa” at COP15.

The official launch event of the International Coalition « Biodiversity Corridors in Africa« , under the co-presidency of the French Republic, the Republic of Gabon, the Republic of Guinea and the United Republic of Tanzania, is holding on December 15, as part of the COP15 in Montreal.

Learn more about the launch event at COP15
Other
news
All news
By continuing your visit to this site, you agree to the use of cookies for audience measurement purposes.
DeclineAccept