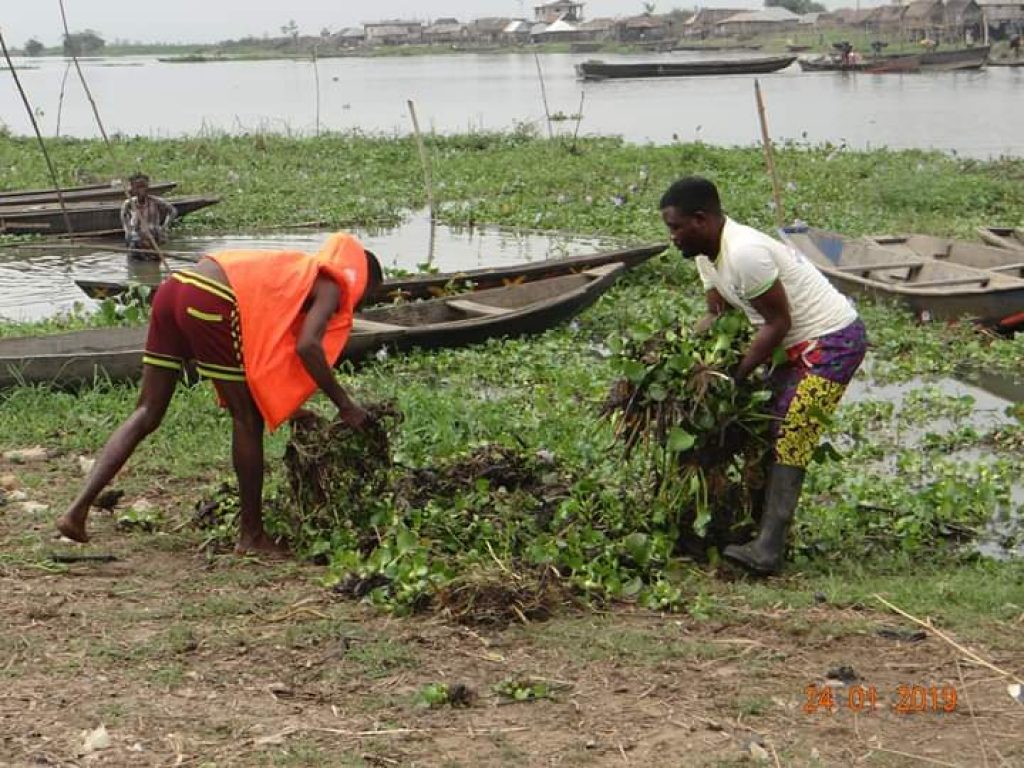 In Benin, the development of water resources remains a major concern due to the anarchic and uncontrolled multiplication of invasive species, including one of the most widespread invasive macrophytes in the world: the water hyacinth (Eichhornia crassipes). In eight months, ten water hyacinth plants can generate 655,330 new plants. The invasion of water bodies by water hyacinth generates multiple negative impacts:

JEVEV has developed an economic channel for the sustainable use of water hyacinths collected by local residents. After several years of research on the invasive species at the Abomey Calavi Ecological Laboratory, the JEVEV team discovered that by combining them with neem cake it is possible to obtain a product capable of naturally enriching the soil, while sustainably keeping harmful insects away. This innovative compost, called Magic Compost, has a dual purpose: it contributes to environmental preservation by reducing the effect of ozone layer depletion caused by agricultural chemical inputs and improves productivity of agricultural areas used for market gardening. This initiative will therefore make it possible to improve hyacinth collection productivity, increase the quantities of compost produced, improve the quantity/quality of market garden produce, and finally increase prices obtained by market gardeners.

The innovative water hyacinth collection and recovery activity has a triple purpose:

Launched in two pilot villages, the initiative has spread to ten villages in the valley and in some forty villages JEVEV also runs sessions to train 140 women and 100 young people in the techniques of making Magic Compost from water hyacinth (through the World Bank’s Framework Programme to Support Agricultural Diversification).

This initiative has already received more than twenty awards at the national, regional and international level, the latest of which was at the COP23 in Bonn, Germany followed by an international competition in Italy.

Finally, thanks to the financial support of Prophetic Economy, the water hyacinth valorisation project has been granted a new component aiming to improve supplying towns’ market garden production by capitalising on the techniques of production and use of water hyacinth compost.

The overall objective is to control the expansion of the biological invasion by water hyacinth and to reduce its consequences in wetlands.

Financed by component 1 of the Agricultural Diversification Support Project - Additional Financing (PADA-AF) for 2018, which planned to train 140 women and 100 young people from the commune of So-Ava on organic fertiliser making techniques based on water hyacinth. Other prizes/awards such as "Dare to Innovate" from the Embassy of the USA in Benin, the University of Abomey Calavi & other partners.

The NGO JEVEV (Jeunesse et Emplois Verts pour une Economie Verte/Youth and Green Jobs for a Green Economy) aims to place the search for well-being within a human development logic based on a less degraded ecological environment and adapted socio-economic environment. It wishes to contribute to the creation of frameworks conducive to development of the green economy – in particular through the strengthening of innovative green technologies adapted to agriculture – which provides jobs in the context of climate change. In this way, it also helps to raise awareness among local populations about basic sustainable development through social, environmental and health issues.