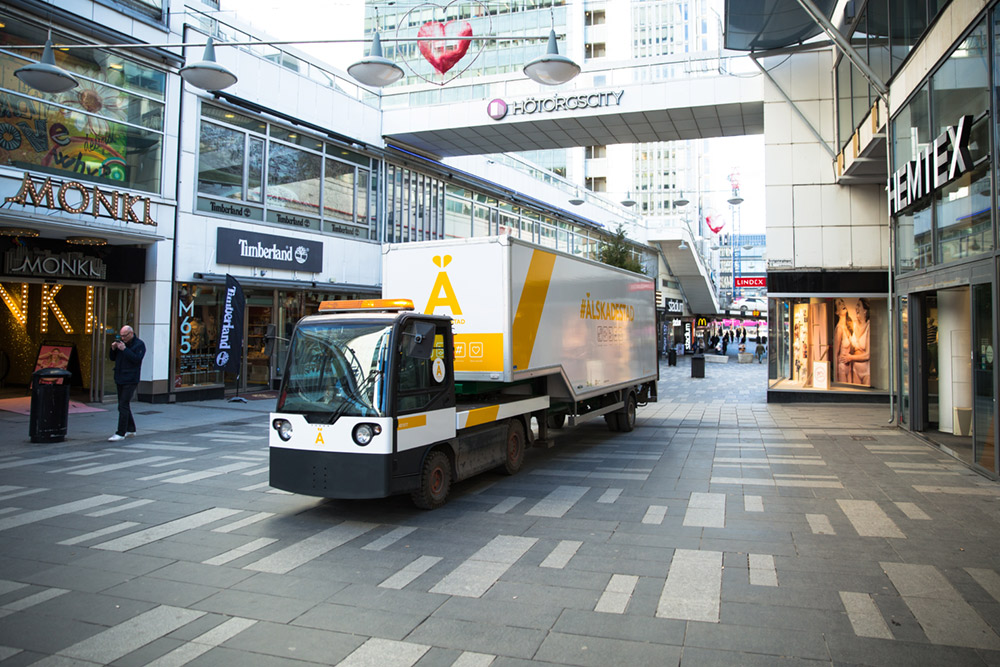 Älskade stad (“Beloved City”)  is a lasting initiative for a better and more pleasant environment in Stockholm. Stockholm City, Ragn-Sells (recycling compagny), Bring (deliveries) and Vasakronan (propriety company) have together created a unique collaboration with the aim of contributing to reducing the impact of traffic in the city centre.  The work on Älskade stad has been underway for several years.

Älskade stad was initiated four years ago when the then Traffic Commissioner extended an invitation to a workshop with the aim of finding better solutions to the traffic situation in the city centre. “Ragn-Sells was invited because we had been operating freight handling and waste management in the major shopping centres in the city centre for many years”, says Erik Wastesson, head of facilities management at Ragn-Sells.

The first collective distribution centre has now been set up in the Zenit garage on Klara Norra Kyrkogata and the cooperation with commercial actors. Ragn-Sells has been involved throughout the entire process and it all came together when a carrier was found in Bring.

“The basis for this is very simple; the freight carriers enter the city with their trucks full and leave it empty. On the contrary, the recycling company, enters the city with empty trucks and leave it full. Putting this together can save vehicle movements”.

Bring’s deliveries to the city centre are driven to the collective distribution centre where they are loaded onto the electric trailer, which is supplied by Ragn-Sells. Initially it is an electric trailer that will contribute to less traffic, emissions and noise. During its delivery round, the electric trailer collects waste and material for recycling to take back. Another partner within Älskade stad is Vasakronan, which is responsible for the collective distribution premises in its capacity as landlord.

“It has been a major challenge with lots of different issues to work out before this came together. The fact that the electric vehicle is now on the road and at work demonstrates the strength and energy that exists in the desire to change” Erik Wastesson says.

In 2018, the project is now developing in Malmö, third city in Sweden.

The city of Stockholm is the initiator of the project