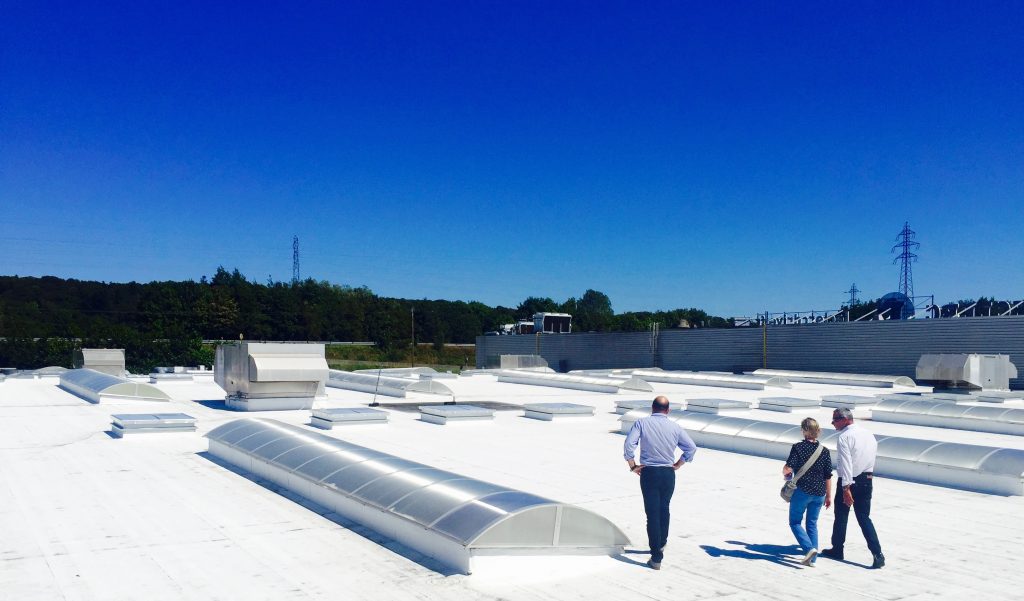 2017 is ranked in the top 3 hottest years ever recorded on planet Earth (since records began, according to the World Meteorological Organisation)

Heatwaves are become harder to survive, to share an example: recently, a primary school refused that pupils enter the school because of fears for their own health in Aix en Provence a town in South-East of France.

A Cool Roof, is a white painted roof conceived to reflect sunlight and therefore absorb much less heat than any standard roofing.

Painting roofs in white to:
• Reduce energy bills by lowering use of Air Conditioning

• Improving comfort in areas where there’s no AC

• Improving the roof’s efficiency  (conditioner, solar panels…)
• Lower the temperature of the roof and there expanding its lifespan as it won’t be damaged by heat on the long-term

Painting in white to help combat:

For the Ecole Louis Blanc school in Paris :

INITIAL REMARKS : heatwaves penalize pupils. For example in June 2017 in Paris, the school just mentioned recorded temperatures going up to 38° Celsius on the top floors.

The idea to paint roofs in white in order to reflect sunlight isn’t a new one, Greek and Tunisian architecture is proof of this efficient solution. In Paris, a new climate plan plans on painting roofs with “reflective” paint.

The Mayor of Paris agreed to test out “cool roofing” on two different buildings including the Primary School Louis Blanc.

Painting roofs in white in order to reduce all urban heat islands.

Surface : 7000m2 ;
140k€ worth of paint
10 working days for painting the roof (with no inconvenience to the shop or clients)
Result = 20k€ savings in electricity consumption / 1 year extra of the roof’s lifespan
Percentage of international efficiency measures at 28%.

Results obtained by multiple buildings show that after being painted, the cool roof enables temperatures to lower by 5°C on average.

The company was born after a estate agent from a big supermarket expressed the need to find and efficient solution for lower temperatures in the building. The person was coming back from a recent trip to the USA where he discovered for the first time Cool Roofs. He decided to develop this white, reflective and thermal paint with the help of European laboratories and 3 other collaborators.

Formed in 2015, « Cool Roof » is a company led by 4 people passionate about the thermal efficiency of buildings.

Producer, provider and applicator of thermal reflective paint in order to improve buildings’ efficiency. “Cool Roof” offers to use thermal ecological innovative paint that reflects heat in the summer and keep heat in in the winter. It respects the environment, it’s light, resistant and it easily applied to all types of roofs.