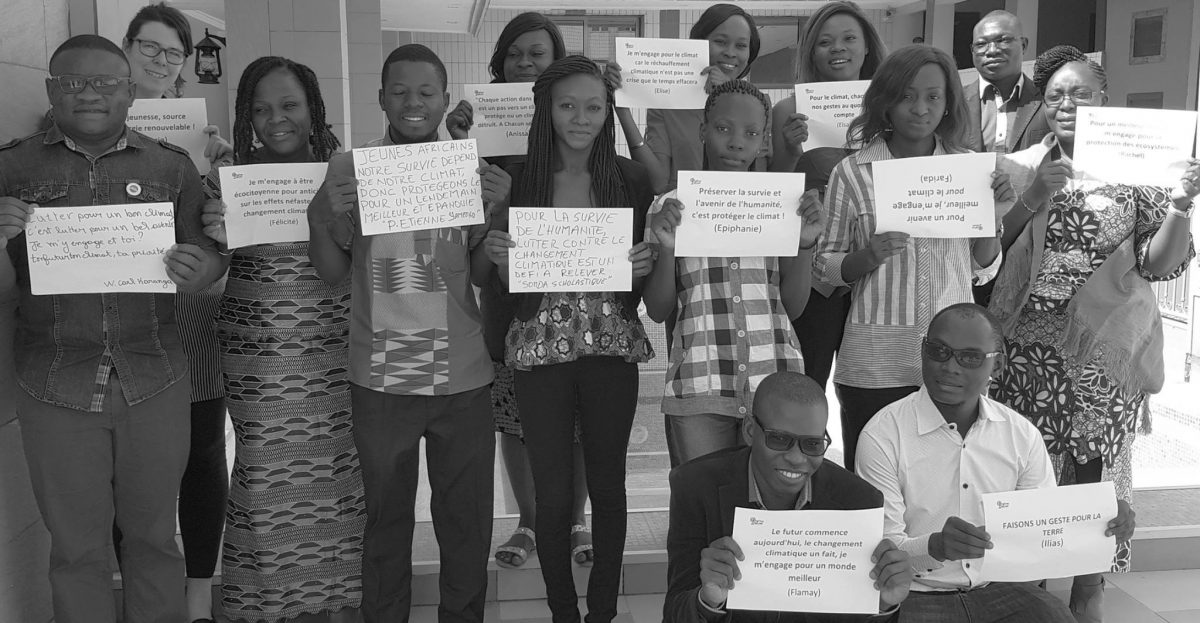 YourFutureYourClimate aims to engage youth aged 18 to 35 from Togo, Benin and Burkina Faso in agriculture and forestry projects that address the challenges of climate change resilient local economic development and to equip them to act as agents of change within their communities. Developed in partnership with the Global Water Partnership – West Africa, the project ultimately aims to build the capacity of rural and peri-urban youth in Benin, Burkina Faso and Togo to undertake and generate sustainable economic activity adapted to the constraints of climate change in a collaborative local context. In addition, the preservation of ecosystems and their contribution to resilience to climate change will be enhanced for and by local populations in the project areas. It is currently in Phase 2 implementation after 3 years of successful implementation.
Local projects in phase 2 (2021-2023)

In Togo, the project supports young people in their transition to sustainable agriculture through agroecological practices will contribute to food security and improve the economic and environmental performance of agricultural production. It also supports youth associations in the establishment of a unit of organic fertilizers and pesticides for marketing (In partnership with JVE Togo)
In Benin, the project contributes to improving the sustainable management of natural and water resources in the Tchoutchoubou micro-basin in the Pendjari sub-basin through the establishment of a mango orchard and the transformation of solid waste into compost for resale. (In partnership with PNE-Benin)
In Burkina Faso, the project promotes good practices in sustainable land management, climate change adaptation and biodiversity conservation to contribute to the financial empowerment of youth associations in the area. (In partnership with PNE-Burkina Faso)

TonFuturTonClimat aims to strengthen the capacities of Burkinabe, Togolese and Beninese youth in rural areas in order to combine environmental responses and socio-economic development, notably through the construction of entrepreneurial projects, technical training and the strengthening of associations of young professionals.

The results show that YourFutureYourClimate was able to mobilize many beneficiaries, not all of whom were interested in climate issues before the project and half of whom had never participated in environmental protection initiatives. In addition, a large majority of the beneficiaries acquired the practical knowledge they wanted to have, such as compost production, construction of improved fireplaces or production of seedlings in nurseries. It is also important to emphasize that most of the beneficiaries have adapted their practices following the training and that many of them feel they have the knowledge and techniques necessary to continue the actions they have implemented. The adaptation of practices has covered all the areas of action of #TFTC, which is a major asset of the project. For example, there are tangible results in Togo where half of the fields cultivated by beneficiaries now benefit from the compost produced during #TFTC. Improved stoves built in Benin have reduced the burden of wood cutting and decreased deforestation of surrounding ecosystems.  On the partner side, the sharing of experiences and collaboration between actors were particularly emphasized as positive points. One of the strengths of the TFTC project partnership is the complementarity between the actors. Each stakeholder has its own expertise, the combination of which increases the impact of the project, whether in terms of mobilization and capacity building of youth (EIS-GWP-WA), implementation (EIS, GWP-WA and country partners) and specific technical expertise (GWP-WA and country partners) or stakeholder mobilization (EIS, GWP-WA and country partners) and regional and international outreach (EIS and GWP-WA). TFTC also relies on the strong commitment of various stakeholders in the countries of intervention, including communes, customary and religious authorities, landowners, decentralized technical services (water, agriculture, livestock, environment) and youth associations. In addition, the project has benefited from excellent visibility in the region and internationally, with 38 public communications and several expressions of interest from major regional actors, including ECOWAS – the Economic Community of West African States.

The International Secretariat for Water aspires to create a world in which water is a factor of peace and a common good accessible to all. Our model of intervention for systemic change is local to global. We combine youth mobilization, validation of local solutions, and influencing actions. Since its inception, ISW has been working to move youth from being bystanders to being agents of change, to increase their presence in decision-making structures at all levels, and to connect the various youth movements committed to water. ISW also works to build their capacity to develop a more sustainable world.