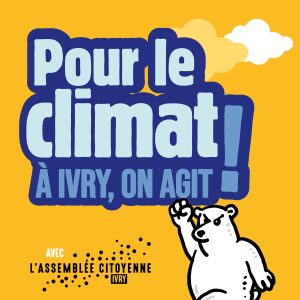 “For the Climate, in Ivry, we act” is a project aiming to define concrete actions against climate disruption and adaptation to be carried out on a city-wide scale, by working on a collaborative effort involving all residents, associations, elected officials, municipal services, competent institutional partners and economic actors. To this end, we conducted an awareness-raising and activation campaign through cultural actions in all the districts of the city during the summer months. The aim was to get the message across about the importance of taking up these issues, which are within everyone’s reach and on which everyone can act. We notably relied on the Climate Fresco (Fresque pour le Climat), which created a large scaled model with the inhabitants to symbolise the state of the planet and situate the problems on a global scale. During September and October, we held thematic workshops at the city level and in each neighbourhood to work with the participants (residents, associations, partners, city services, elected officials) to map out the “field of possibilities” and formulate concrete proposals for collective action to reduce the climate footprint of our daily activities. Thus, we have defined the main lines of public policies to be carried out, in connection with sustainable food, energy, waste reduction, mobility, city planning and the place of nature in the city, eco-feminism… Faced with a very large number of viable and qualitative proposals (565 proposals), we proceeded to a preferential vote in order to prioritise the areas of action to be carried out over the next two years.

Carry out climate action in the city by co-constructing with the territory's key players.

565 proposals for concrete actions for the climate transition were formulated. Grouped into 35 major areas of public policy, they were prioritised by the residents through a preferential vote. It is estimated that nearly 1,000 people participated either in the thematic workshops at the city and district levels, or in one or more activities proposed by the neighbourhood centres (Maisons de quartier) in connection with this issue. Nearly 50 people volunteered to take part, alongside the government services, elected representatives, associations and partners, following the work to put the action into effect: the climate action monitoring committees. To this end, we have released an additional budget of €700,000 to carry out the prioritised actions until 2023.

In terms of qualitative results, we have made it possible for many people in Ivry, of all ages and social backgrounds, to grasp the challenges of the transformation of community life in favour of the climate transition. A lot of the work carried out with the neighbourhood centres (Maisons de quartier) has made it possible to be as close as possible to the people who are sometimes the furthest away from these issues. The city’s associations, which are very involved in the process, have been able to find spaces to share their knowledge and projects and to make them known. They will play a decisive role in the implementation of the actions co-constructed here. The institutional partners also participated fully in the workshops and committed themselves to supporting these actions alongside us.

From the city's own funds

The town of Ivry-sur-Seine is a municipality located in the Val-de-Marne department in the Île-de-France region. Bordering Paris, Ivry is part of the Greater Paris Metropolis. It is included in the Etablissement Public Territorial Grand Orly Seine Bièvre (T12). It is located on the left bank of the Seine, about 5 km from the centre of Paris.